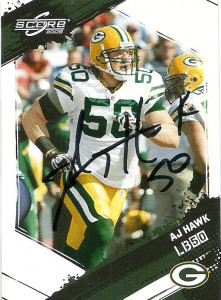 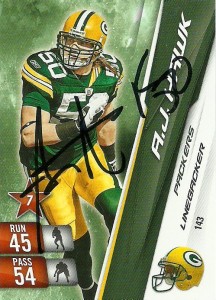 AJ Hawk was a member of the 2006 NFL draft which had some storied players in it. Expectations were high for the class and comparisons were drawn between this draft and the 1989 and 1985 classes respectively.  The first surprise of the day was dropped by the Texans who did not draft either Reggie Bush or home town favorite Vince Young, but DE Mario Williams.  After D’Brickshaw Ferguson was taken off the board by the New York Jets, the defensive needy Packers drafted AJ Hawk out of Ohio State with the 5th pick.

AJ played in 51 games at Ohio State collecting 394 tackles (196 solo), 41 stops for a loss, 15½ sacks, seven INTs,  and three forced fumbles.
The colorful Hawk became an instant fan favorite in Green Bay for not only his aggressive style of play but his colorful personality and creative haircuts. His rookie season was outstanding as Hawk finished 3rd in voting for defensive rookie of the year honors after recording 119 tackles, 3.5 sacks, and 2 interceptions.  He’d play for the Packers for the next 8 additional seasons- logging 4 additional 100+ tackle seasons.  In 2015 AJ was released from the Packers under amicable terms.  At the time of his departure, Hawk was the franchise’s all-time leading tackler with 1,030 combined tackles. He signed with the Bengals and played in 11 games,  making 16 tackles and a sack.

AJ is a passionate podcaster and web enthusiast. You can visit his website at thehawkcast.com