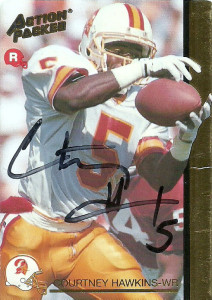 Courtney Hawkins played collegiately for the Spartans at Michigan State.  A dangerous kick and punt returner, Hawk got his chance to shine as a receiver in his Sophomore year when he made 60 receptions for 1080 yards and 6 touchdowns.  At the time of his graduation Hawkins had 138 receptions for 2210 yards and 12 touchdowns.

Courtney played 9 seasons in the NFL. Originally a second round choice of the Tampa Bay Buccaneers, Hawk’s best season came in 1993 when he caught 62 balls for 933 yards and 5 touchdowns.  He was also used seldomly on punt return duties.  Hawkins joined the Pittsburgh Steelers in 1997 and had a renaissance in 1998, with 66 receptions for 751 yards and a TD. During that season,  Hawk broke a Steelers team record with 14 receptions (for 147 yards) against the Tennessee Oilers.  He retired after the 1999 campaign.

Currently he is a highly regarded head coach and athletic director for the Beecher School District in Michigan.  Beggars can’t be choosers, and while I really wanted to get my Star Pics 1992 card signed as well, I guess he decided to keep that one in exchange for his autograph on his Action Packed Rookies entry.