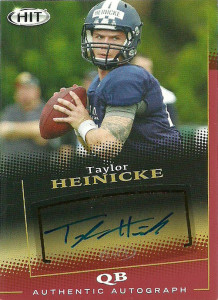 Taylor Heinicke turned Colonial Athletic Association Old Dominion into a contender with his arm, and  a school record 11,483 career passing yards and 102 touchdown passes.  He was also an adept runner and handled punting duties from time to time. In 2013, Taylor threw for a record 730 passing yards, which stands as a Division I record. Despite this, Taylor’s draft analysis did not stand up well, with many scouts also knocking his size.  He went unselected in the 2015 NFL draft. Although he was courted by the Falcons, Taylor felt more like he had a chance going to Minnesota.   Taylor called it, “A dream come true,” to play in the NFL and for the Vikings.  Heinike had a great camp and preseason going 27 of 41 for 279 yards and two touchdowns  in the preseason finale against the Tennessee Titans.  Comfortable with incumbent Teddy Bridgewater and Shaun Hill moving forward, Minnesota cut Christian Ponder.  While Taylor has not dressed for any games, he looks to challenge 14 year veteran Shaun Hill in the near future for the backup job.