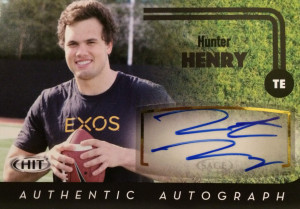 Hunter Henry is the highest regarded TE in the 2016 draft. Playing collegiality for the Arkansas Razorbacks, Henry has reliable hands, and is considered a fine receiver, but is not the most polished blocker. He has drawn comparisons to Cowboys TE Jason Witten by NFL pundits and many are intrigued by his talent.  He goes as early as mid 1st round to the Falcons to late second round with the Texans. Ranked roughly among the top 50 of prospects, I’d love to see the Texans take Henry with their second pick of the NFL draft.

Hunter did not last on the draft board until the Texans selection. The Chargers took him early on in round 2 and will groom him to be the heir apparent to All-Pro Antonio Gates.