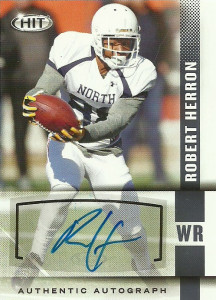 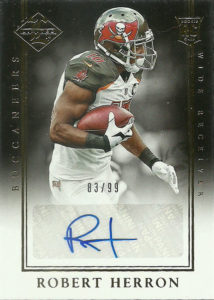 Robert Herron finished his career at Wyoming with 152 receptions for 2,030 yards, and 20 touchdowns. A two-time Honorable Mention All-Mountain West selection, Herron, was the only player in the Mountain West who logged 2 games with 150 yards or more in receiving yards.  Herron is considered a big play specialist with great straight line speed, running the 40 in 4.38 seconds.

He was selected by the Tampa Bay Buccaneers during the 6th round of the 2014 draft.  During his rookie season, he logged 6 catches for 58 yards, and his first touchdown, a 9 yard strike in a 37-31 loss to the New Orleans Saints.  Herron would be injured and passed up in camp by veteran Louis Murphy at the slot during his Sophomore campaign. He’d be cut, but later signed with the Miami Dolphins. He signed with the Raiders in 2016, but did not make the squad. Currently he is a free agent.