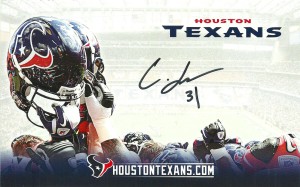 Charles James’ star shot to fame in 2015 with the Houston Texans appearance on the HBO show Hard Knocks. Socks was originally a free agent signing of the New York Giants back in 2013, but didn’t make the roster in 2014.  Charles signed as a free agent with the Texans in the offseason. With his colorful and frankly ugly socks, memorable soundbites, rags to riches story, childlike enthusiasm for the game, and play during the preseason, it was easy to cheer for Charles James to make the roster of the Texans. He even got to contribute at runningback, blazing his way for a long TD against the Saints that was called back! The problem is – he didn’t make the team. The Texans were confident with their current lineup of defensive backs, so the turk saw James on the last day of camp. The Texans hoped to float him through waivers so he could join the practice squad, but the Ravens signed him instead to theirs. The Texans reshuffled their defense due to injuries and signed James to the active roster taking him back from Baltimore in October.  James was excited about returning to Houston where he immediately joined the special teams and as a nickel back on the defense.

A really nice guy, Charles James was happy to sign anything and everything fans put in front of him. He engaged each one of us and is grateful that he is back in H-Town.

The second stop on Lance and my marathon tour of Houston was at the stadium Go Texans store. Honestly I didn’t think we were going to be able to squeeze everything in, but it worked out well. It also helped that we were the first people in line for the Whataburger event earlier that day, but Lance got worried about his car and really wanted to get James so we took a shot. The line moved quickly and we were in and out the door in 15 minutes putting us on the way to the third leg of the trip.