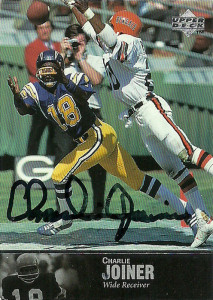 Charlie Joiner played an exhaustive 18 seasons in the AFL/NFL. Originally a 4th round pick of the Houston Oilers in 1969, as a defensive back, he made the switch to wide receiver and then started 8 games in 1970. He’d record 28 receptions for 416 yards and 3 TDs, including a 87 yarder.  He’d play with the Oilers through 6 games of the 1972 season but was traded to the Cincinnati Bengals.

Joiner spent the next 3 seasons there where he started coming into his own during the 1975 season. He’d pull down 37 receptions for 726 yards and 5 TDs.  The Bengals then traded him to the Chargers, where Charlie became the perfect fit for Air Coryell’s West Coast Offense catching passes from young Dan Fouts. In the midst of the ‘Dead Ball Era’, Charlie had 50 receptions for 1056 yards and 7 TDs -earning his first Pro Bowl nomination. He’d return to form in 1979 with a career high 72 receptions and 1008 yards with his second Pro Bowl berth.  The following year in 1980, Charlie earned his final Pro Bowl trip, and his first and only All-Pro Honor with 70 receptions for 1132 yards and 7 TDs. While he’d log a career high 1,188 yards in 1981, he did not earn any additional honors for the remainder of his career.  Joiner personified longevity in a league meant to break people.  He continued to play for the Chargers until his retirement after the 1986 season.  His 239 games played as a wide receiver, receptions, and yards, were NFL records at the time of his retirement.