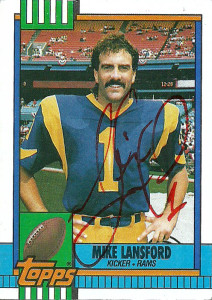 With the amazing mustache, mullet, and barefoot kicking style, Mike Lansford was a great compliment for the LA Rams look. A California native, who kicked in college for Washington and Pasadena CC (CA), before being selected by the New York Giants in the 12th round of the 1980 NFL draft. Unable to make the team, he had tryouts with the Raiders and 49ers and then finally landed on the Rams roster in 1982 where he played in 9 games and went 9 of 15 on field goals.  His best season came in 1984, going 25 of 33 on field goals. He then had solid seasons in 1988 and 1989. With the Ernie Zampese offensive machine in full swing Mike led the league in 1989 with an astounding (at the time) 51 extra points made and scoring a career high 120 points. 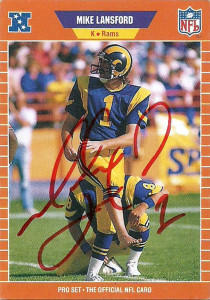 Lansford ran into contract issues with Rams management that year. He was being paid a pittance based on his performance and vested years in the league. Mike could’ve held out, but instead out of good faith, came in and kicked for the team anyway while they negotiated a new deal with his agent. The Rams came back with a salary that put him near to slightly above the league average, but the kicker rebuffed the team.  In October, he and the team put it all behind them as he signed a 2 year deal.  While Lansford’s 1990 was considered a down year, in short, it was still a banner year by most kicker’s standards. 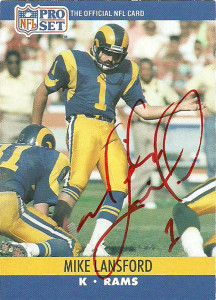 Lansford has been quoted as saying that, “He wanted to kick for the Rams until his toe turned blue.”, but unfortunately all good things must come to an end.  He signed with the Cleveland Browns for the 1991 season, losing out to Matt Stover for the job.  Mike is the All-Time leading scorer in Los Angeles Rams history, and was an outstanding kicker when the game was on the line, never missing a game winning kick.  In at least 8 contests he put away the opposing team with ice in his veins.

I had been wanting to get the iconic kicker for sometime on a few cards, and was disappointed when I missed out on him TTM back in 2014.   He is involved in kicking camps for kids, where I finally got a response from him early in 2016. A big time LA Rams fan, Lansford attended the city rally to bring back the Rams, where he was quoted as saying that, “I bleed blue and gold, just like you guys do!”, to a cheering crowd.