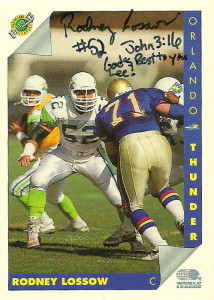 Originally a  10th round selection of the New England Patriots during the 1988 draft, Rodney Lossow earned All Big 10 Honorable Mention as a Junior while at Wisconsin. He’d bounce around with the Los Angeles Rams and Calgary Stampeders, before being selected with the 4th pick of the 4th round during the WLAF offensive lineman draft. He’d anchor the Orlando Thunder‘s  offensive line at Center through their appearance in World Bowl II in 1992.

Rodney loves teaching and has been a coach at Roosevelt High School in Minnesota for many years. He responded in under a month and included a nice note. Apparently his kids were blown away that he got a TTM request. He also inscribed the card with a bible verse:

16 For God so loved the world that he gave his one and only Son, that whoever believes in him shall not perish but have eternal life.