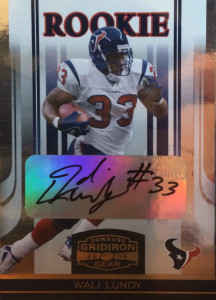 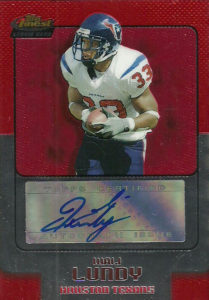 The Texans were retooling much of their offense under new head coach Gary Kubiak in 2006.  Left in a pinch by runningback Domanick Davis who was trying to recover from an (eventual career ending) injury, and not feeling any back in the rotation could handle the load, the Texans drafted Wali Lundy in the 6th round of the draft.

The Texans 2006 draft was the best the team had experienced in its young franchise history. It yielded Mario Williams, DeMeco Ryans, Eric Winston, Owen Daniels, Lundy, and David Anderson.  All of these players saw significant and notable playing time with the Texans. Lundy’s flame burned quick and burned bright.  He’d jump Vernand Morency in the lineup and start the Texans first game of the year.

He’d then battle Ron Dayne and Sakmon Gado for the starting job throughout the remainder of season. A nagging ankle injury he suffered during the season carried through to the 2007 preseason. Lundy ended up being one of the final cuts of the preseason, losing out to Sakmon Gado.

Wali played collegiality at Virginia. There he set many records including ACC records with 52 career TDs.  He finished his career for the Cavaliers with 4,497 all purpose yards.  An arts aficionado, Lundy has appeared on the cover of SI based on his music tastes, and is involved in the national arts and music scene.