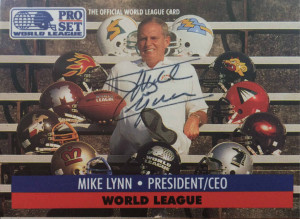 Mike Lynn had passed literally within a few days of me sending him a request for an autograph. I received back my letter with the card unsigned with a note stating that he had passed away shortly thereafter. It took me some 4 years to track down this card on EBay. It is hard to imagine why anyone would forge this autograph, being that Lynn was not an in demand player, so I am fairly safe to assume that this autograph is probably authentic.

Mike Lynn was a member of the NFL Board that oversaw the WLAF when it first got off the ground.  He took over as President/CEO from Tex Schramm in 1990 and served as a de facto commissioner of sorts (parallel to what Paul Tagliabue was in the NFL) through the 1991 season. Lynn presided over the league during the first WLAF Draft, and subsequent season. Initially there was much buzz surrounding the league, and there was a gentle understanding from the NFL that it was going to take time to grow the fanbase and talent pool.  After the first broadcast games, things seemed good. There were even press releases touting that the league was going to expand by possibly 2-4 teams after the season, but like with many leagues there were growing pains to be encountered. The WLAF’s luster wore off quickly, as the league’s attendance levels and TV ratings slid. Internally the NFL’s 26 owners and the WLAF’s chief funder, expected a quicker turn around on profit.  Lynn did a good job riding out the quiet storm and kept the WLAF ship steady through the full season. A month after World Bowl I, Mike resigned to focus more on the internal power struggle that was occurring within the Minnesota Vikings.

Lynn is recognized by longtime Vikings fans as the General Manager and trading partner that was fleeced by the Cowboys during the Herschel Walker trade.  Believing that the Vikings were merely a blue chip runningback away from winning the SuperBowl, he sent a bevvy of picks and players to Dallas in 1990 for Walker. While Walker didn’t pan out the way the Vikings hoped, the Cowboys used the ammo acquired from the trade to propel them into the Super Bowl spotlight for roughly the next 10 years. It is unfortunate that Lynn is remembered for the Walker trade, when he was such an influential and intelligent power broker and sports negotiator, which included putting down an internal revolt in the Vikings power structure by buying out feuding owners shares.

Lynn had retired from the power structure of the Vikings in 1992 and lived quietly in Memphis before he passed away in 2012.