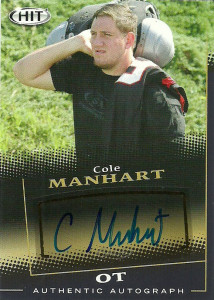 At 6’6″, 310 it appears on the surface that Cole Manhart possesses the size and weight to play at the next level. With decent footwork pulling and sealing blocks, he also plays whistle to whistle, and is a solid technician in pass protection.  The major question that dogs the former tackle, now center, is the level of competition he faced, as Cole played at little known Nebraska-Kearney.  The reviews are quite mixed on Manhart,  leaving the scouts targeting him as a priority free agent in the 2015 draft.  The Eagles signed him but he finished camp with the Saints. Eventually he landed on the Raiders, and earned a futures contract with the Steelers for 2016.