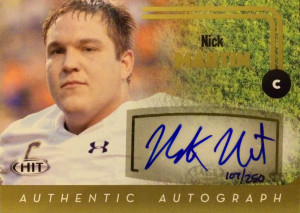 Nick Martin is a highly regarded center who played for the Notre Dame Fighting Irish. Clocking in at 6’4″, 301, Martin has the flexibility to play center and guard. The team captain in 2014 and 2015, Nick played on the same line as his brother Zack in 2013. A center with a mean streak, Martin is a road grader who has the true potential to become a starter at the pro level. Scouts rave about his talent, but with such a deep pool of prospects at his position, Nick will go off the board between the 2nd and 3rd rounds.

With Ben Jones betraying the Texans for a pittance to join the Tacks in Tennessee, the Texans were still looking to shore up their offensive line after making some free agency moves. Houston drafted Martin with their second round pick where he is expected to compete for the starting center or guard job.