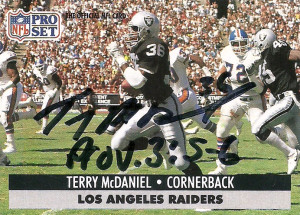 A first round draft choice in 1988 out of Tennessee by the then Los Angeles Raiders, Terry McDaniel was originally a track man and sprinter in college with reputed 4.3 speed that earned All-American Honors in 1988.  He moved from WR to DB during his Sophomore campaign at Tennessee and displayed a natural and fluid ability to blanket receivers.  Terry adjusted quickly to the pro game, but broke his leg in the second game of his rookie season in LA.  At that time he was the first Raider rookie to start the season opener in the secondary over the last 17 years. He returned in 1989 and pulled 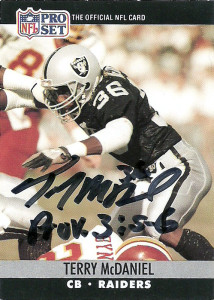 down 3 interceptions. In 1990 McDaniel started the season on the sidelines, but came off the bench in the opener to key team’s victory over the Denver Broncos.  A dominating man to man cover back, McDaniel paired with Lionel Washington to make teams fear the Raiders secondary. Terry matured and from 1992 to 1996 he earned Pro Bowl honors. His best season perhaps came in 1994, when he recorded 7 interceptions  for 103 yards and 2 TDs to go along with 3 fumble recoveries. Terry played for the Raiders through the 1997 season, before playing 9 final contests on the Seahawks in 1998. Always dangerous, McDaniel had 8 career touchdowns playing defense, with 6 on interceptions and 2 on fumble recoveries.

Another member of Tecmo Superbowl, McDaniel’s speed and ball hawking skills were well represented by the game. Writing him care of the church ministry he works for, he signed my cards and refused my donation. He inscribed these two cards with a Bible verse from Proverbs 3: 5-6.

Trust in the Lord with all your heart
and lean not on your own understanding;
6 in all your ways submit to him,
and he will make your paths straight.