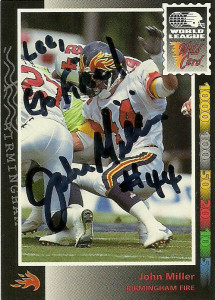 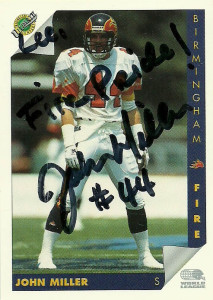 Okay- John took a lot of work to track down, because John Miller is a pretty common name. Eventually using the power of Google, cross referenced with the data off of Miller’s 3 cards, I was able to locate leads off of a networking site and sent these cards out. John was kind enough to respond, personalizing these cards, including a small note, and his business card. John apparently still keeps in touch with many of his Birmingham Fire from his days in the WLAF.  His son carries on his legacy playing at John’s Alma Mater, Michigan State.