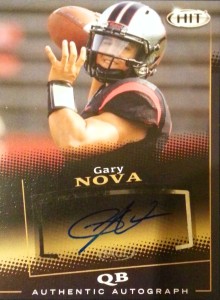 Gary Nova had a sold career for the Rutgers Scarlet Knights.  He started 41 of 46 career games and set career-highs as a senior with a 57.1 percent completions, 2,851 yards and 22 touchdowns with 12 interceptions. After not being drafted, Nova tried out with the New York Giants at their May mini-camp, but was not signed. He remained on their radar all season but was not brought back in since there wasn’t any injuries in the lineup.

Gary earned another tryout, this time with the Green Bay Packers. He then worked out at the Rutgers’ Pro Day in 2016, while he finished up his degree in Labor & Employment at the university. Nova continues to train for another shot at the pro level, and has most recently garnered some interest from the CFL.