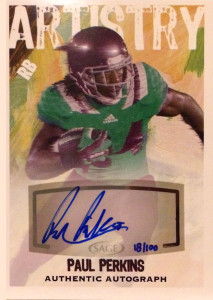 Paul Perkins was considered the most consistent, if not the most complete runningback to come out of the PAC 12 in 2016. The UCLA back had 1,374 yards in 2014, and led the PAC 12 with 1,575 yards in 2015. A slasher back with elite vision and one cut ability,  the lean Perkins will be expected to contribute as an extra receiver on 3rd down, but durability will be a question as he will need to commit to take on blocking larger blitzing linebackers to become an every down back.  Regardless Paul has college highlight worthy film with his elusiveness and ankle-breaking cuts.  He’s expected to work in a committee backfield while he bulks up to the rigors of the 16 game NFL schedule and is a strong 3rd round pick.

The Giants selected Paul during the 5th round of the 2016 draft. He will make an interesting utility back for offensive maestro and new head coach Ben McAdoo.