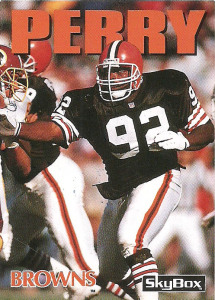 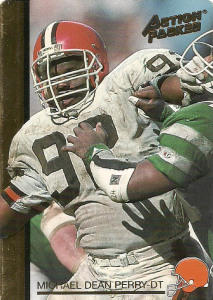 With uncanny quickness off the snap Michael Dean Perry smashed the record books for career sacks (24) at Clemson from his defensive tackle position.  At 6-1, 285, Perry would be considered slightly undersized by today’s standards. Even then he was considered a bit smaller than usual, but Perry turned this to his advantage and wrecked opposing backfields. 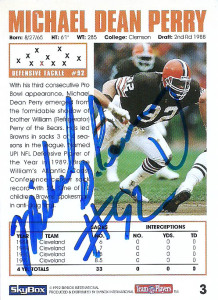 Being drafted by the Cleveland Browns in the 2nd round of the 1988 draft was a blessing to MDP, and he’d quickly endear himself to legions of Browns fans everywhere. In his rookie season, Perry flashed his playmaking skills. Coming in as a situational pass rusher, he logged 25 tackles, 6.0 sacks, recovered 2 fumbles, one of which he rumbled with for a TD.  In 1989, Bud Carson switched the defense to a 4-3 alignment and Perry became a sensation. He’d earn the first of 5 Pro Bowl nominations, and his first of two All-Pro Honors. Michael Dean’s 1990 was so dominating (107 tackles, 11.5 sacks, 2 FF) that talk around Cleveland was that MDP should receive NFL Player of the Year Honors. At one point the fanfare around Perry was so crazy, McDonalds started selling burgers in the Cleveland area called the MDP- which consisted of a double quarterpounder with double bacon. Ugh… Michael continued to play for the Cleveland Browns through the 1994 season.  At that point head coach Bill Belichick was going in another direction on defense, so the team had a mutual parting of ways with Perry. 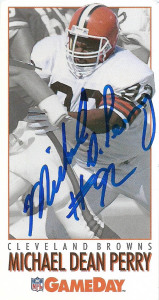 Michael still had some gas in the tank, so he signed with the Denver Broncos in 1995. He’d somehow earn one last Pro Bowl berth in 1996. 1997 was MDP’s final season in the NFL. He’d play primarily for the Broncos, and then the final month of the season with the Chiefs. By then the nicks and cuts had caught up with him and Perry decided to call it a career. While other teams attempted to lure Perry out of retirement, he resisted and sequestered himself to South Carolina.  Of the offensive linemen that he faced over the years, Perry considered Randall McDaniel and Mike Munchak his most difficult opponents.

Since then Michael has invested in a string of Subway sandwich shops.  He is the younger brother of William ‘The Refrigerator’ Perry, who he remains extremely close to. I’ve always found it odd when a player decides to sign his card on the back. Still not one to look a gift horse in the mouth, I was very happy to add this fan favorite to the collection. 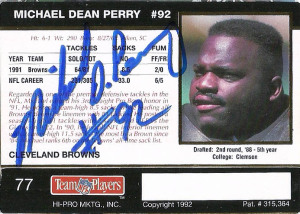