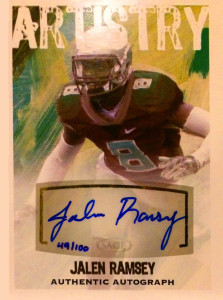 Jalen Ramsey is considered the top defensive back of the 2016 draft and is expected to go quite early.  The young cornerback from Florida State has drawn comparisons to both Sean Smith and Richard Sherman. The blue chip DB certainly displays the athleticism needed for the position to be a shut down corner and the versatility to play safety.  A long jump champion, Ramsey is a strong press cover man, that can hop inside and jam a slot man. He ran a 4.41 40 and was the top performer both at the vertical and broad jump at this year’s combine.
He finished his college career at Florida State with 181 total tackles, 15.5 TFL, 5 sacks, and 3 picks for 58 yards. Most draft pundits view Ramsey as a good fit for the Safety position.

Ramsey’s draft stock has remained steady near the top of the 2016 class and has been linked to going as high as #1 overall with the Titans, or as late as #10 with the Eagles.  The Titans pulled off a monster trade though and moved out of the top 5, with the Browns following soon there after. It made a lot of sense that Ramsey moved at #3 to the San Diego Chargers, who were going through a defensive makeover after the departure of longtime veteran safety presence Eric Weddle during free agency, but they signed Casey Hayward, and went with Joey Bosa instead.  The Cowboys were up next but went with Ezekiel Elliot instead. Finally at pick #5 the Jacksonville Jaguars selected Ramsey, where he is expected to contribute immediately to the young squad now undergoing a defensive makeover.