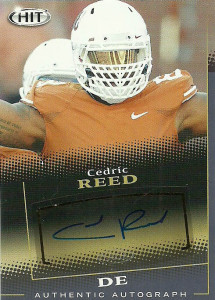 My collector friends were grabbing up all the boxes they could of Sage 2015. At the bargain price of $19.99 I finally was able to snag a box at a local Walmart, and inside the box was this gem in Longhorn Cedric Reed.

A monster defensive end at 6-5, 272, Cedric Reed started 32 games for the University of Texas. During that time he was a 2 time All-Big 12 selection and named to numerous watch lists.  Over his decorated career at Texas, Reed had 37 tackles for loss, 18 sacks, and 6 forced fumbles.

After not being selected in the 2015 NFL draft, he’d sign with the Buffalo and be placed on their practice squad. At the end of the season, the Bills extended him a futures contract for 2016.