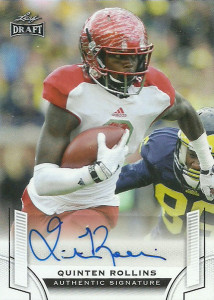 Quinten Rollins is a very intriguing player. Collegiality he played 3 years of basketball for the Miami-OH Redhawks before deciding to try out for the football team. There he made an immediate impact on the defense at corner, and was selected as the MAC Defensive Player of the Year with 7 interceptions and 72 tackles. Technically a two sport star at Miami- OH, he also finished second in school history in steals with 214.  A small-ish DB, at 5-11, 195, its thought that he can bulk up to the next level, but really needs to improve his bottom speed to be a better corner. The Packers liked what they saw here and selected Rollins at the bottom of Round 2 during the 2015 NFL draft. During his rookie season Rollins had 31 tackles, a sack, 6 pass defensed, and 2 interceptions- returning one of those 45 yards for a TD against the Rams.