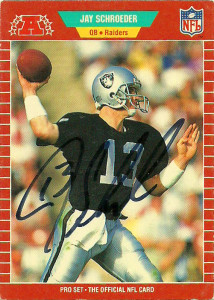 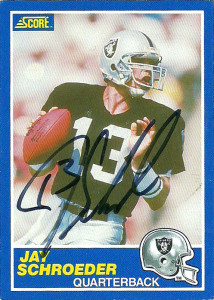 Jay Schroeder had a solid career at UCLA but decided to pursue baseball instead. After kicking the tires around in the minor leagues, Schroeder declared for the NFL draft in 1984. He’d be selected by the Washington Redskins in the 3rd round and ride the bench behind Joe Theismann.  After a grizzly injury to Theismann ended his career prematurely, Schroeder stepped in and threw for a franchise high 4106 yards in 1986. He’d earn his only Pro Bowl appearance after the season. Jay had a really nice touch on the long bomb. This was 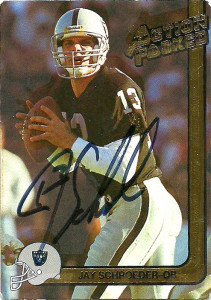 evidenced by him leading the league in yards gained per pass completion- a feat he’d accomplish 3 separate times over his career.

He’d separate his shoulder in the season opener in 1987, and consequently lose his starting job to veteran Doug Williams who had the hot hand at the time. Schroeder asked for a trade and the Redskins acquiesced, trading him and some conditional draft picks to the Raiders in exchange for Jim Lachey. 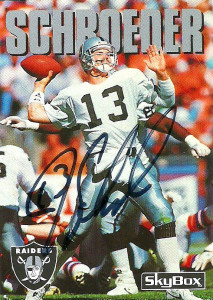 Jay played his next 5 seasons for the Raiders. His best season came in 1990 when he led LA to the AFC Championship game agains the Buffalo Bills. The team posted a 12-4 record and he threw 19 touchdowns to only 9 interceptions. In 1991 the Raiders drafted Todd Marinovich to eventually replace Jay.  By 1993 Jay was allowed to bolt from the Raiders, where he signed with the Cincinnati Bengals, starting 3 games as David Klingler‘s backup. The following year he’d hop over to the Arizona Cardinals and split snaps under center with both Steve Beuerlein and Jim McMahon, posting a 5-3 record.

After the season Jay retired. A solid signer, as of 2016, he’s a coach at the high school level and signed these 4 cards for me lightning fast.