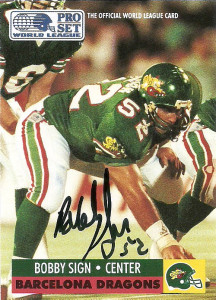 Bobby was considered one of the best centers in the country, playing 3 years for Pitt and a final year at Baylor. It made sense to Sign to play in the SWC since he was from Texas. Unfortunately in that final year at Baylor (1988), knee injuries sidelined him for a good portion of the season.

Undeterred, Bobby signed with the Oilers as an undrafted free agent in 1989, but was cut before the beginning of the season. Sign was definitely a WLAF candidate, and the Saints signed him in 1991 and sent him to the WLAF for experience.  The Barcelona Dragons signed him via the enhancement allocation draft.  He’d anchor down an impressive offensive line along with Barry Voorhess and Scott Adams. For the season the line only allowed 22 sacks- good for second best in the league. This allowed the team to advance all the way to World Bowl I against the London Monarchs.  Bobby returned to the WLAF for 1992, and helped the Dragons win the division. Barcelona lost in the playoffs again to the eventual champions- this time to the Sacramento Surge 17-15.

Bobby returned to the Dallas area. After a bit of detective work I found that he is working for a high end clothier and tailor of quality suits.  I sent this card to him via the store where he has built himself quite a reputation for customer service. He sent me back a nice note along with the signed card, where he told me that he was blessed to play in the WLAF and sad when the league decided to go on hiatus after the 1992 season.