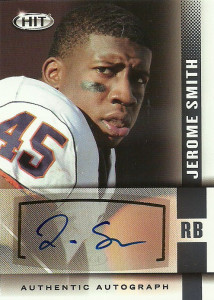 Jerome Smith played runningback at Syracuse wher he rushed for 914 yards and 12 touchdowns in his redshirt junior season at Syracuse. He left with one year remaining for the NFL, but went undrafted in 2014- instead signing a free agent contract with the Atlanta Falcons. He’d make the Practice Squad and then be promoted to the active roster at the end of the season, suiting up for one game.
In 2015, the Falcons had an open competition at runningback. Smith had 22 carries for 72 yards during the preseason, but got injured and later reached an injury settlement with the Falcons upon his release.