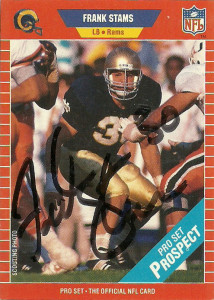 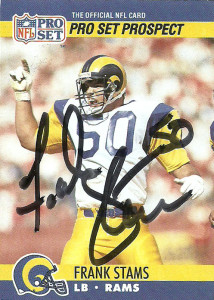 A high motor outside linebacker and defensive end out of Notre Dame,  Frank Stams originally started as a fullback for the Fighting Irish. They’d convert him over to LB where he’d be named MVP of the Fiesta Bowl in 1989. In his Senior year, Frank was named first-team All-American as he led the team with 7 sacks and finished 5th on the team with 51 tackles.

The Los Angeles Rams tabbed Frank in the second round of the 1989 draft. He’d be thrust into the starting lineup as injuries decimated the Rams linebacking corps. Stams beat out Fred Strickland at ILB in 1990 and finished second in tackles with 78 in 13 games.  Stams battled injuries most of 91, and then signed with the Browns in 1992. He’d play with the franchise through 4 games into the 1995 season and a final game with the Kansas City Chiefs.

Stams lives in the Cleveland area and is an ambassador for the team.