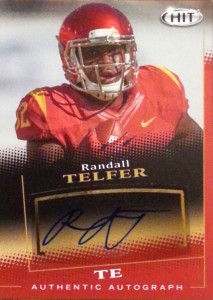 At 6’4″, 250, Randall Telfer has all the tools necessary for a team serious about blocking for the run. As far as professionally graded blocker go, Telfer fits the bill as an in-line blocking tight end and some teams believe he has potential at the next level at least to fit in with goalline and ’12 personnel’ packages. While some teams lamented his receiving skills, Telfer was relied upon to release out in playaction and zone coverage to make the catch. His best year came in 2011 when he caught 5 TDs.

The Cleveland Browns liked Randall enough where they selected him in the 6th round of the NFL draft.