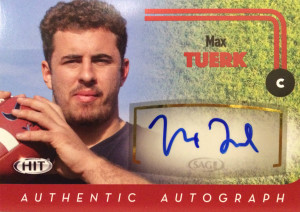 Max Tuerk played for the USC Trojans where he displayed versatility prized at the NFL level, by playing efficiently at every position on the offensive line.  He’s displayed great footwork and plays smart football.  Max has got the height and the long arms, but not the size, and will have to bulk up to hold his own at center against nosetackles in the NFL.  While initially presented as a center in a relatively talented class at that position- some clubs have projected Tuerk as a guard or even a tackle. His draft stock would be even higher, but a torn ACL suffered in October of 2015 diminished his draft stock significantly.

Tuerk had a 3rd round grade slapped on him for the 2016 draft and did not disappoint. The Chargers selected him with their 3rd round pick where he could see action at either guard or center.