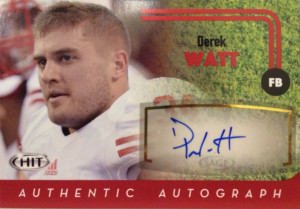 Derek Watt is the younger brother of Houston Texans defensive end JJ Watt, and while he followed in his older brother’s footsteps to Wisconsin, Derek elected to play fullback for the Badgers. With the versatility to play fullback or H-Back, Derek makes the case as a role player in a multiple RB set. Derek seals blocks well and picks up pass protection with ease. He has also displayed decent hands out of the backfield with 30 receptions for 309 yards and a 1 over his 4 years at Madison.  Watt also is a guy not afraid to cut his teeth on special teams as he had 17 total tackles for the Badgers.  One of the higher rated fullbacks, Watt will get a late round flyer or be a priority free agent for a team needing a fullback in 2016.

Derek heard his name called in the 6th round by the San Diego Chargers where he is expected to rejoin backfield mate Mevin Gordon from Wisconsin as his blocking back.