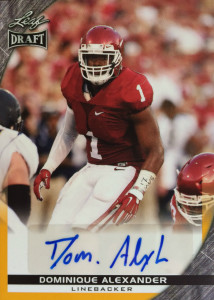 After taking the Big 12 by storm in his Freshman season, Dominique Alexander held down the starting position at linebacker for the Sooners for 3 years before joining his brother Derrick  in the 2016 NFL draft.  Undersized, but plays with intensity, Alexander is wildly at home equally chasing the run or guarding against the pass. Scouts want to see Dominique bulk up some and improve on shedding blocks.

The 3rd ranked ILB in the 2016 draft, Alexander is expected to go early in either the 2nd or 3rd round. Surpisingly Dominique fell off the draft boards all together. He quickly found a home with the Cleveland Browns and made 7 total tackles and a fumble recovery in his rookie year.