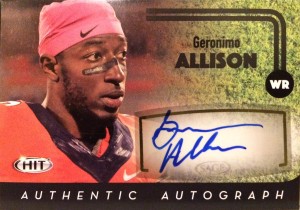 Geronimo Allison played wide receiver in junior college for Iowa Western in 2012 and 2013. His team went 11-0 and earned them the Division’s National Championship. He transferred to Illinois in 2014 and had 106 receptions for 1,480 yards and 8 TDs.  Gifted with a good frame and displaying many positive traits, Allison is still growing into his role as a wide receiver.

Allison went undrafted in 2016, but was a priority free agent for many interested squads. Eventually he signed with the Green Bay Packers. As Aaron Rodgers is known to spread the love around between his receivers, Geronimo was able to corral 12 catches for 202 yards and 2 TDs his rookie year. During the playoffs Allison chipped in another 5 receptions for 65 yards. Things were looking great for him entering 2017, but he’d be suspended by the league for the first game of the season for substance abuse.