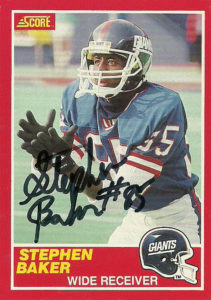 Stephen Baker the Touchdown Maker. Back in the Stone Ages of Giants football, before they developed an aerial attack of note (well except for that fluke season when Simms passed for 5,000 yards) the Giants just had no… panache to their wide receiver corps. They had lunch pail guys like Lionel Manuel and Odessa Turner, but relied heavily on a plodding ground game and Mark Bavaro to make the offense click.  In stepped Stephen Baker, a dangerous speedster out of none other than Fresno State. 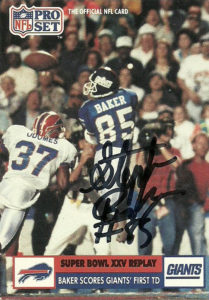 Fresno State provided a wonderful wide receiver pipeline to the NFL during the 80s. A JC transfer, Stephen saw two years of action with the Bulldogs, posting gaudy numbers with 29 receptions for 844 yards, a 29.1 average, and 3 TDs in 1985, and 33 receptions for 785 yards and 7 TDs in 1986.  The Touchdown Maker was selected in the 3rd round of the 1987 Draft by the New York Giants.  Baker did not disappoint in his long range antics. Over his 6 seasons in the NFL he posted no less than 16 yards per reception, including a career high 20.8 YPR in 1990. The season also marked his most impressionable under the gun, as he scored a TD in the Giants 20-19 win over the Bills in Super Bowl XXV.  (The game to me is considered one of the most exciting Super Bowls in league history.) 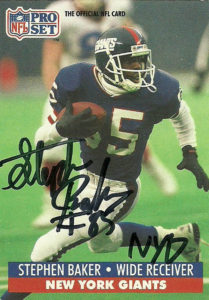 Baker went on to play for the Gaints for two more additional seasons after the Super Bowl.

The Giants had gone through some coaching changes after the Super Bowl win. Bill Parcells left the team in Ray Handley’s hands. The Giants slipped in both seasons and by 1993 Dan Reeves was coaching the team.  Baker was released. He toyed with the idea of signing with the Browns and reuniting with Bill Belichick, but completely blew out his back. He consulted many doctors, but they advised him to retire.

As of 2017, the Touchdown Maker enjoys fan meet-and-greets for the Giants, and spending his spare time in photography. He also avidly flies radio controlled helicopters, planes, and quads.

The Score 1989 card of Stephen Baker is one of the reasons Topps got clobbered in the market that year. It’s a high quality photo of Baker in action about to make the catch and the shadows and color really pop.  Stephen Baker signed these 3 cards for me, and included a really nice note encouraging me to connect with him through social media.