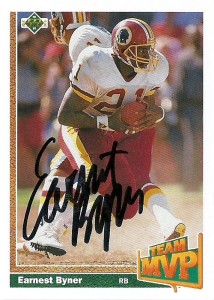 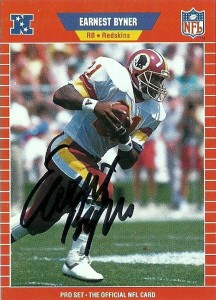 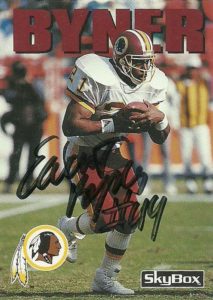 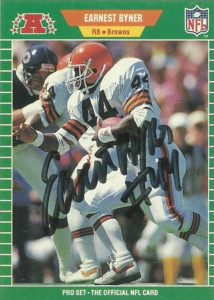 After his stint as a coach for the Jacksonville Jaguars runningback coach from 2010 to 2011 Earnest Byner was signed to the Tampa Bay Buccaneer staff in 2012 serving under Greg Schiano. Unfortunately Shiano’s style didn’t mesh in the pros, and he was gone after two seasons. Byner was not retained as ownership decided to clean house after 2013. 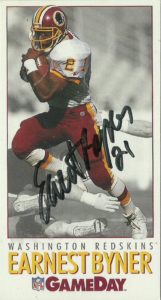 Since that time Earnest has addressed ‘The Fumble’ in public, apologizing to fans for what happened, and giving a tear-jerking recollection of it during the 30 for 30 ESPN documentary “Believeland”.   Time heals all wounds though and the vast majority of Browns fans really embrace Byner as one of their own without judgement.  It goes without saying that it’s great that Byner has been able to move on from what happened- something that he said stuck with him and changed his playing style for the remainder of his career in the NFL.

Earnest has done a lot of motivational speaking too. He also has no problem engaging his fans in public and is very popular in Cleveland. My friend DeadHorse scored these Byner autographs for me along with Kevin Mack and Greg Pruitt at an Ohio based Cleveland Browns event they attended.  DeadHorse was kind enough to accommodate me on the 3 cards which I felt were his best action shots of Byner (Skybox 1992, ProSet 1989 CLE, and GameDay 1992).