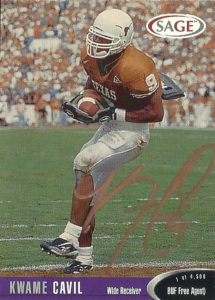 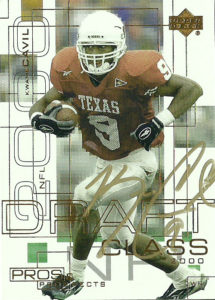 Kwame loves signing cards when I see him. When I presented these two cards to him after camp, his first response was, “Ohhhh yeah!” Cavil has been rounding the football camp for kids circuit over the past few years. He’s very good with them, knows how to organize and lead, and it seems that all the kids respond well in kind and just love him. As of 2016 Cavil has moved from Manor High School up to Temple where he coaches football as well.

Coincidentally both of these cards are very important numbers in their ‘limited release’ with the Sage being #1 of 4,500, and the Upper Deck issue coming in at 1000 of 1000. It means very little value wise, but as far as their place in my universe, it’s the first time I’ve ever hit on either end like that.