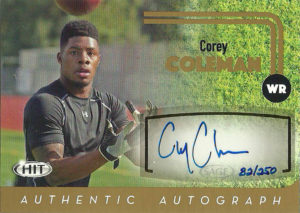 I had the hots for Corey Coleman in the weeks running up to the 2016 NFL Draft. I thought he’d make a perfect fit for the Houston Texans- plus he was a Baylor kid. The Texans desperately needed a receiver, but Coleman flew up the draft boards so quickly the Browns went ahead and took him at #15 overall.  Considered a true playmaker, Coleman displays 4.37 speed and can really make things happen in small spaces.  He’s also a gifted return man. In both his Sophomore and Junior seasons Corey eclipsed 1100 yards receiving. In his Junior campaign specifically, Coleman posted 20 TDs receiving on 74 receptions and a monster 18.4 yards per reception.  Despite his proven stats and skills, Coleman is considered somewhat of a project at the pro level. The knock on him is that he doesn’t have a firm understanding of the wide receiver route tree.

Despite scouts concerns the Browns edged him into the lineup and Coleman had a decent rookie season for the team in 2016. He started 10 games and recorded 413 yards on 33 receptions, and 3 TDs.