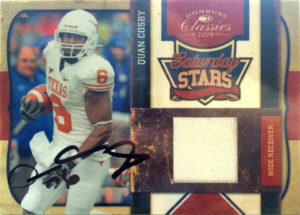 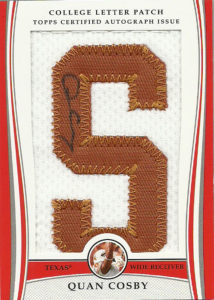 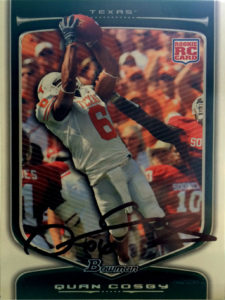 Well the University Coop Season Opener turned out to be a total bust in 2015. Both 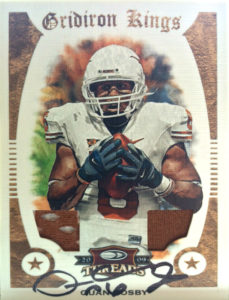 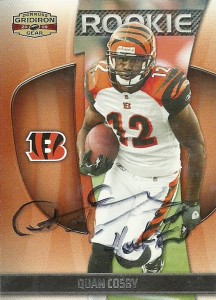 Tony DeGrate and Doug Dawson were no shows, but I was still able to parlay a few Quan Cosby cards into autographs as he was hanging out in the building.  He’d sign his Donruss Gridiron and Upper Deck cards for me at the time.

Later I reloaded and got the rest of his cards at the Tiff’s Treats Grand Opening. With some rare cards here in the GridIron Kings, Donruss Classics, and Playoff Contenders, Quan took the time to study each card intently before signing each one. Since I did not have the time to prep the Contenders card, Quan made sure the ink dried on the card.

Let’s not lie. There are some real design gems in this group. Among them, I spent the extra coinage to get a hold of this Donruss Threads Gridiron Kings patch card. The college letter patch also goes without saying. The Bowman just smacks me in the face with simplicity and finishes it off with a great photo.

About the only one that doesn’t get me out of the group is the Donruss Gridiron Gear card.  I’m not sure what is going on with the abstract deconstruction in the background.  Although Quan stands out from the background composition, he’s anchored by the strange looking artifact of photo background that looks like a #1. It just detracts more than it adds and is just way too over designed.