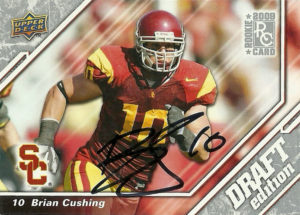 For a couple of years there- well like the last 5 or so, I had been wanting to get Brian Cushing on a few more of his cards.  I had been hot on his trail after he showed up to film a commercial on the high school field that Drew Brees played on- literally a block from me. I didn’t know about it until he posted it on his twitter a day later- leaving me kicking myself, and packing a Houston Texans box of cards to always keep in my card for such future emergencies.  I fired off these cards to him in Houston, but by that point he moved to a new place. A few fans later that told me that Brian showed up once a year like clockwork to sign for a bank promotion in Houston, but I never had any luck with that event ever getting posted.

Thankfully enough a fellow collector really felt for me after I got screwed over by Just Greg on Sportscollectors.net. Greg felt that because I had asked him how much he had wanted dollarwise to help me get a few autographs, that I was essentially calling him greedy, so he decided not to help me. I felt that Greg had a more passive aggressive objective: Offer me help to get players I need, and then get some satisfaction by denying me the help he offered. Regardless, his behavior was pretty weak and it left me very disappointed in another member of the hobby.

Moving on, my friend had just gotten Brian’s autograph, so I shot these out as fast as possible to his questionable home address. A few months later, these beauties -postmarked from the Texans temporary training camp in WV came back to me with his autograph penned on all the cards.  The success gave me quite a charge, as it was the first one for Brian on the boards I track since early 2013. 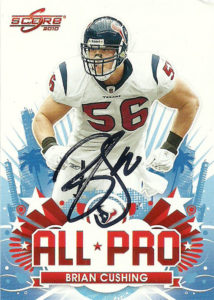 I really liked his 2010 Score All Pro card. It’s a really well designed card, and while the AP is loathe to admit that they still honor his nomination.  While the 2010 base issue is a slight variant on the 2009 set, I enjoyed the deconstructive effect and design of the cards.

Brian picked up where he left off in 2010 with a All Pro worthy 2011 as he switched to an inside linebacker position in the Texans front under new defensive coordinator Wade Philips. In 16 games Cush had 2 interceptions, 2 forced fumbles, 4 sacks and 81 tackles as the team zoomed up the defensive charts. The team named Brian their MVP.

Brian’s 2012 was also off to an equally fast start with 22 tackles and an interception through 5 contests- but a dirty crack back block by Jets guard Matt Slauson ended his season. He’d rehab his ACL and return for 2013. A little more than a year after his injury, Cushing was injured again on a low block from KC runningback Jamaal Charles.  It was a gruesome injury as B Cush blew out his LCL and broke his leg.  The defense collapsed without Cushing in the lineup and the coaching staff was fired after the season. 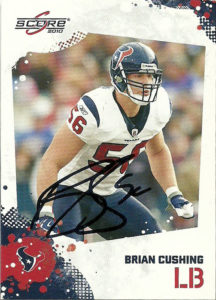 Still you have to hand it to Cushing. He returned again from injury in 2014. Is he a cyborg? Is he bionic? I’m not sure but he picked up 41 tackles, a sack, and 1 forced fumble in 14 games playing under new defensive coordinator Romeo Crennel.   Already at that point, cat calls had begun for Cushing to step aside for new blood, but the linebacker remains defiant. During the 2015 preseason, Brian was brought national attention because of his intensity on display during the Texans appearance on Hard Knocks. He’d then back it up with 63 tackles in 2015- his first full 16 game slate in about 4 years.

Cush recorded his 638th tackle during the 3rd quarter of the Texans/ Colts tilt in 2016 to break the franchise’s all-time tackle mark previously held by DeMeco Ryans. Brian also was the Texans 2016 Walter Payton Man of the Year Award Nominee.  Despite the Twitter banter going around his bland statistics over the past few years, Brian is well respected by pundits and coaches around the league. Deep analysis reveals that he was quite the secret weapon on the Texans defense in 2016. He ranked 5th among ILB with an 11.5 percent run stop percentage, and first among linebackers in yards per coverage snap with only 111 yards allowed.  (I posted these facts on Twitter, and was surprised to see his wife liked it.)

All signs still pointed to go for the ageless Cushing in 2017, as he got to try his game under promoted defensive coordinator Mike Vrabel, but he was suspended for a second drug infraction early in the season. Brian rejoined the Texans 10 games later, and explained that the banned substance he was suspended for was for mental health.