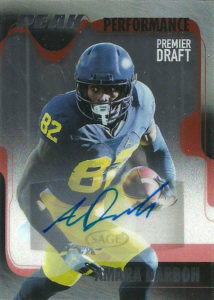 Amara Darboh was selected in the 3rd round of the 2017 draft by the Seattle Seahawks.  He really didn’t catch the eye of scouts until his final year at Michigan even though he was putting up reputable numbers by his Sophomore campaign.  Darboh caught 58 passes for 727 yards and 5 TDs in 2015- his Junior year.  In 2016, Amara had 57 receptions for 862 yards and 7 TDs.  His NFL Draft profile compared him to Mohamed Sanu. Darboh’s got a good NFL build and the speed, but needs to work on separating himself from receivers at the line of scrimmage.

Amara life is a unique story.  His family fled war torn Sierra Leone and came to the states when he was just a kid. In 2015, he was made an American citizen.

You can clearly see that Sage is upping their game here with this nice glossy shot and action shot of Amara Darboh, and it’s a welcome change to the market. My only complaint is that the silver and black tend to disappear on the background a bit which contributes to a bit of eyestrain. For the longest time I looked at Darboh’s card and thought it said ‘Darbon’.