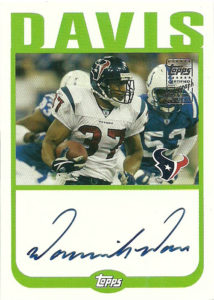 Ah Dominick Davis… probably my favorite in the short Houston Texans Mt. Rushmore of runningbacks. He was the engine that made the Texans offense move during the early growing pains of the franchise.  Originally a 4th round pick out of LSU, Domanick burst onto the scene in 2003 with an impressive preseason debut that helped him make the squad. In the meantime the team muddled behind the uninspired rushing of free agent signee Stacey Mack and rookie Tony Hollings.  Davis was an afterthought intent on making an impression.  By week 7 the Texans had enough of the Mack-Hollings experience, and gave Davis a shot at the starting job in a week 6 tilt against the New York Jets. (Remembering his effort during the preseason that still stuck out in my mind, I quickly signed and started Domanick on my fantasy team.) The Texans lost, but Davis in his first game did not disappoint, rushing for 133 yards. He was not only the first runningback in the short 23 games of the franchise to rush for 100 yards and the single game rushing record, but also caught 9 passes for 70 yards to give him 199 for the game, a yards from scrimmage team record. 3 more times during his rookie season, Domanick rushed for over 100 yards which helped him rumble for 1031 yards and 8 TDs winning the 2003 Rookie of the Year Honors. 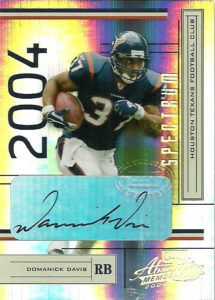 2004 was Davis’ watershed moment. He had a combined 1731 yards from scrimmage, posting career season highs in all rushing categories (302 carries, 1188 yards, 13 rushing TDs, and 68 receptions for 588 yards). During a week 14 contest against the Jacksonville Jaguars, Domanick again broke his single game rushing record (31 carries 158 yards).  The Texans were content rushing on the back of Davis to support their anemic QB play.  Behind him really was a who’s who of runningbacks and role players.  Davis was the darling of fantasy football- a 4 down back dynamo.

In 2005 Davis career came to a sudden end after 11 games. He rushed in 5 contests for 20 or more carries, including back to back 28 carry efforts in week 6 and 7.  In week 10 he almost eclipsed his single game rushing record with 155 yards on 29 carries against the Ravens. The following week against the Titans, Davis ran 22 times for 139 yards- in his final game.  I don’t think most people at the time knew it, (I mean I sure didn’t) but as Domanick left the field, it’d be the final time he’d suit up as a pro. The team in the meantime completely disintegrated finishing with a 2-14 record. The original coaching staff and front office would be dismissed after the season.

The Texans and Davis held out hope he’d return, if not sometime during 2006, for sure 2007.  He rehabbed and returned for 2006, but a ‘bone bruise’ in his knee aggravated during training camp caused him to be placed back on IR for all of 2006. 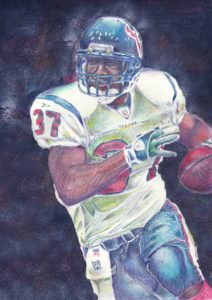 During this time period, Domanick changed his last name to Williams, more in line with his family’s name.  He also changed his number to 31 and got a new look to boot.  As Williams continued to rehab, rumors began to circulate that he’d never be able to play again. Eventually it came to light that if Williams was to continue playing football, he’d be running bone on bone- as the cartilage in his knee had nearly been destroyed.  As he was in a fair amount of pain and he could not pass his physical, he was cut by the Texans in 2007.

As of this post, Domanick is retired and living in Louisiana.  Recently I went ahead and acquired these two solid certified autographs of Davis/Williams for a cheap price through EBay. He popped up briefly and just long enough on Twitter for me to send him a copy of this really cool painting I did of Williams- some 10 years ago, but I wasn’t able to close a deal to get it signed. I’d love to see the Texans bring him back as an ambassador in the future which he sounded open to when I briefly talked to him, but he’s since disappeared again.  While Davis/Williams star burned briefly bright in the hearts and minds of Texans and fantasy football fans, he’s now relegated to being a footnote of firsts in the team’s record books.