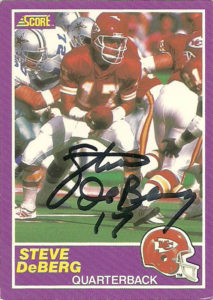 Steve DeBerg is a warrior of old. Over his career, Steve played from 1978-1993, and 1998. He played some 17 seasons in the NFL and almost pulled off one of the rarest of feats of appearing in 4 different decades of football.  DeBerg is considered one of the great masters of play action, which served him well during his revival in the late 80s and early 90s for the Kansas City Chiefs.

Originally a 10th round choice of the Dallas Cowboys in 1978 out of San Jose State (and thought to be Roger Staubach‘s heir), Steve was traded to the 49ers before the regular season began. He’d start 11 games his rookie year in the NFL, but his numbers were atrocious (8 TD, 22 INT), and his win/loss record reflected it (1-10).  In 1979, DeBerg was allowed to spread his wings and led the NFL in Attempts (578) and completions (347), but young rookie QB Joe Montana was chomping at the bit.  In 1981, Deberg was traded to the Broncos, and he’d play there for through 1983, (when Denver got a hold of… John Elway). 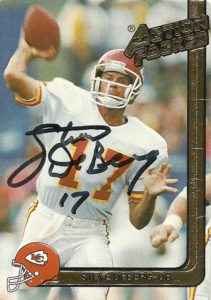 In 1984, Steve was traded to the Tampa Bay Buccaneers. He’d throw for a career high 3554 yards that season and throw 19 TDs to 18 picks. In 1986 he’d back up future NFL HoF QB Steve Young, and then in 1987, back up Heisman Trophy Winner Vinny Testaverde.  After his 4 year stint with the Bucs concluded, DeBerg signed with the Kansas City Chiefs in 1988.

It’d be in 1989 that DeBerg was introduced to ‘Marty Ball’, and after fighting off Ron Jaworski, Steve Pelluer, and rookie Mike Elkins, posted a 6-4 record and almost led the Chiefs to the playoffs. It was a huge turnaround for the franchise- one that had been a doormat of the AFC West for most of the 80s. DeBerg continued his magical reinvention in 1990.  During that era of NFL football, only throwing 4 interceptions in 444 pass attempts was almost unheard of- but DeBerg did just that, leading the NFL with only .9 % of all his passes intercepted that season. He also had the highest adjusted average yards per completion at 7.58, leading the Chiefs to the playoffs. He played one more season with the Chiefs before being replaced in 1992 by Joe Montana (again). 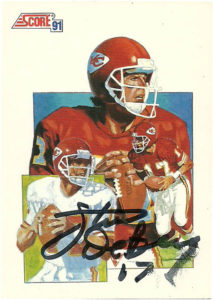 Steve signed with the Bucs again in 1993. He’d be the backup QB for them for a few games over 2 seasons. Cut during 1994, DeBerg found his way onto the roster of the Dolphins and backed up Scott Mitchell after Dan Marino was injured.

DeBerg was long thought retired after that and was hired by Dan Reeves to be a QB coach with the Giants in 1995. Later when Reeves moved to Atlanta, he hired DeBerg as his QB Coach in 1996, however in 1998 they’d decided it’d be best if DeBerg backed up starter Chris Chandler. Steve finally reached the Superbowl with the Falcons- a game that they lost to the Broncos and… John Elway.

Truly, in the football universe for a while there, everything was six degrees of Steve DeBerg, with him being connected to so many great quarterbacks. A true competitor, Steve always left it out on the field. I remember during one season, he played a few weeks with a cast on his non-throwing hand during his time with the Chiefs.

Steve’s a signer who does so in random spurts, so it was somewhat difficult to peg down when I should send out to him. Along the way, Steve’s modern era cards (let’s say post 1988) were pretty nice, and it was hard for me to trim it down to under 3 of them. Sadly the Score 1991 Leader card that I liked the most got smudged- Usually a by-product of rushing signatures before they dry back into a sleeve or envelope. Still one can’t complain. I liked all 3 of these a lot. They really stood out among the sets to choose from. The simplicity of the Action Packed 91 almost couldn’t be touched, and the Score 1989 card is vibrant.