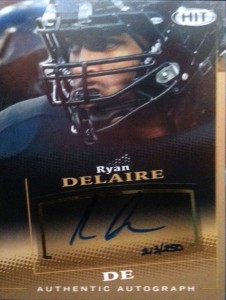 Ryan Delaire played at the University of Massachusetts for his first two collegiate seasons. He played in 18 games before transferring, earning 25 tackles and 2.5 sacks at defensive end.  He transferred to Towson where he posted 32 tackles for loss, 22.5 sacks and five forced fumbles.  Delaire was invited to the combine and posted decent numbers, running a 4.97 40 and bench pressing 220 23 times.  He was expected to be drafted in probably the 6th or 7th round, but instead became a high-priority free agent after the 2015 draft.  A tweener, Delaire would fit in comfortably with the right scheme as a 3-4 outside linebacker or a defensive end.

In early May 2015 he signed with the Tampa Bay Buccaneers.  Later he’d be signed off the Redskins practice squad and joined the Carolina Panthers that year. As a backup in 9 games he had 8 tackles and 2.5 sacks during his rookie year.  In 2016, Ryan saw spot duty in 6 games, with 6 tackles, a sack, and 1 pass defended, but a knee injury ended his season prematurely. Currently in 2017, he’s a free agent.