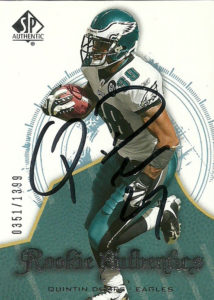 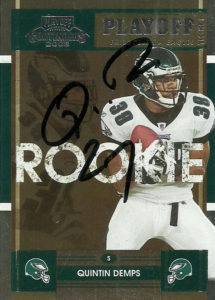 What a long, strange, windy road its been for Quintin Demps.  A ballhawk at safety, Demps punctuated his career with the rare accomplishment of two 100 yard interception returns for touchdowns. He also recorded a total of 17 career interceptions while playing at Texas-El Paso.  His combine numbers were encouraging enough, and again he proved that he had the wheels to be in the pros with a 4.39 40 combine showing.  Scouts scrutinized his tape and did not like his fundamentals. They thought he was a sloppy tackler, didn’t have the size (5’11”) to play safety, and despite his 40 showing, scouts were doubtful he could transition to cornerback because of a perceived lack of speed at the second level. Demps was selected in the 4th round of the 2008 draft by the Philadelphia Eagles. 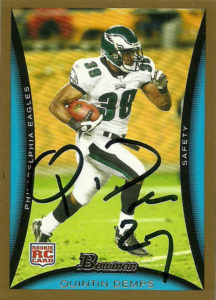 He set out to prove scouts wrong, and as a kick returner Quintin had a solid debut with 52 returns for 1314 yards, a 25.3 yard average, and a TD on a 100 yard return.  He did not see any playing time as a starter, but recorded his first sack and forced fumble playing sparingly on defense during his rookie season.  Quintin didn’t see much time playing for the Eagles in 2009 either. He’d be released among the final cut downs in 2010.

Unable to find a team, Quintin signed with the Hartford Colonials of the fledgling United Football League mid-season and made an immediate impact. He recorded 8 tackles, and a spectacular interception against the Las Vegas Locos, returning it 73 yards to paydirt.  The Texans liked what they saw and took a flyer on the young defensive back, stashing him behind  Bernard Pollard, Eugene Wilson, and Troy Nolan as a special teamer. 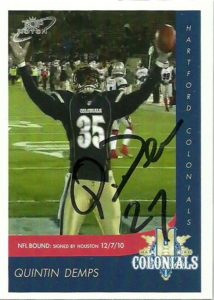 In the off-season the Texans fired defensive coordinator Frank Bush. In came Wade Phillips to retool everything. After releasing Pollard and Wilson, Houston made many free agent moves, including bringing in Danieal Manning. They also drafted Brandon Harris and Shiloh Keo.  By the end of camp Demps was the odd man out, but soon thereafter was resigned by the Texans as Manning suffered a fibula injury.  He’d see more action on defense than ever before, recording 2 interceptions for 47 yards and 20 tackles in 2011. Although he missed some time in 2012 with a broken forearm, he still contributed another 21 tackles.

Left unprotected, Quintin signed with the Kansas City Chiefs in 2013. In 6 starts, he put up 4 interceptions for 61 yards and 25 tackles.  He also had his most extensive playtime since his rookie year returning kicks with 33 returns for 992 yards and a 95 yard TD. Demps then played in 2014 for the New York Giants. Demps started 9 games for the Giants, and recorded 4 interceptions for 19 yards and 41 tackles.

Demps returned ‘home’ to the Texans in 2015 and is seen in the show Hard Knocks on HBO talking to general manager Rick Smith. He was brought in to compete with veterans Stevie Brown and Rahim Moore in the safety rotation, but in the end became the starter at strong safety over Eddie Pleasant.  Demps started 13 games for the Texans hauling in an interception, 1 FF, 35 tackles, and .5 sacks. Happy with how Demps had matured like a fine wine over time, the Texans signed him again for the 2016 season.  Quintin responded with his best season as a pro, starting 13 games and pacing the team by intercepting 6 passes for 54 yards and 38 tackles. The Texans finished first in total defense for the first time after the 2016 season, largely due to the coheasive secondary play, led by Jackson, Bouye, Joseph, Hal, and Demps. Quintin gets no respect. Even though he was first at his position in interceptions on the #1 defense in the league, he didn’t earn a Pro Bowl berth. After the season, the Texans once again allowed Demps to leave for greener pastures. In March of 2017, he signed a multiyear contract with the Chicago Bears.

With one of my friends visiting from out of town, she got to see how geeky I could get about these sorts of things.  Quintin was a really cool guy at the Academy Battle Red Stampede Tour with fellow player Jonathan Grimes. Demps really liked the custom I did of him from back in the UFL days. He was amazed that I had gotten a photograph of him after he returned that interception for a TD against the Locos.  I was very proud of that find as I actually got a high resolution screen shot from the video feed of the game.  He kindly signed 4 cards for me during the event.