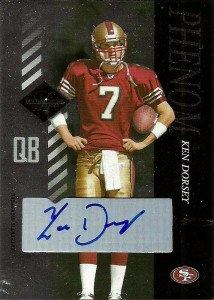 The 2003 draft for the most part is considered a train wreck of quarterback talent.  Carson Palmer, taken #1 overall, is the only quarterback from the draft to even make a Pro Bowl.  Ken was selected in the 7th round by the San Fransisco 49ers.

A two-time runner up for the Heisman, Ken Dorsey finished his college career at Miami, FL going 668/ 1153 for 9,565 yards and 86 TDs to only 28 interceptions.  During his time playing for the Hurricanes Dorsey led the team to a 38-2 record and a National Championship appearance in 2002.

His tenure in San Fransisco was… less than desired as he split time with Tim Rattay.  SF was going through a rough transition searching for their QB of the future. The combined Frankenstein effort resulted in a 2-14 record for the 49ers. Starting 7 games Ken posted a career high 6 TD passes and 1,231 yards and 9 interceptions.  After the season the 49ers switched from Dennis Erickson to Mike Nolan, and then drafted Alex Smith in the 1st round of the 2005 draft. Still Dorsey was able to post a 1-2 record throwing for 481 yards and 2 TDs.

In 2006, Dorsey was traded to the Cleveland Browns. He’d ride the bench for the next two seasons, before briefly stopping back into the starting lineup in 2008.  Starting 3 games for the Browns,  Dorsey threw for 370 yards and 7 interceptions.  Ken briefly resurfaced with the Toronto Argonauts of the CFL in 2010 , retiring after the season concluded.

Ken joined the Carolina Panthers staff first as a scout in 2011, and then later as a quarterbacks coach- a capacity he’s held through the 2016 season.

Ken’s certified autographed cards briefly experienced a surge in value back in 2015, as he is one of a long line of starting Browns quarterbacks. Steiner Sports ran a promotion to apologize to fans who’d ever gotten a Browns starting QB certified autograph and was offering a $50+ dollar in store credit for any fan who sent in those autographs.  However now that the promotion is over, these autographs along with other former starting Browns’ QBs autographs have returned to normal.