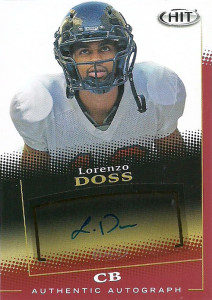 Converted wide receiver Lorenzo Doss played collegiality at Tulane. A three year starter for the Green Wave at corner, Doss earned All-Conference honors in 2012 and 2013. A strong competitor with a desire to make the big play, Lorenzo had 33 pass breakups and 15 interceptions- 2 of which he returned for touchdowns. His 271 interception return yards were a school record. Displaying quick feet, and 40 speed (4.47), Doss’ size (5’10”, 190) and penchant to gamble did not sit well with scouts. They graded him as a 5th or 6th round pick.

Selected by the Denver Broncos with the 164th pick of the 2015 NFL draft, Doss’ made the squad but was a healthy scratch for all 16 games. He is expected to clean up his tackling and join the squad as a slot corner man and special teams player.  In 2016 he posted 4 tackles and 2 passes defensed.