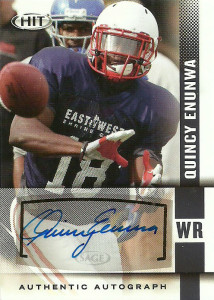 The Jets drafted Enunwa in the 6th round of the 2014 draft.  He’s slowly worked his way off the practice squad and into the Jets lineup. A hybrid receiver that is too big to be a receiver, but too small to be a tight end, Enunwa has found a role as an H-Back in New York’s offensive scheme.  In 6 starts during  an interrupted 2015 campaign (due to suspension) he had 22 receptions for 315 yards.  With a shorthanded receiving corps Quincy scored his first career touchdown during the 2016 opener against the Cincinnati Bengals. He finished with a career high 857 yards on 58 receptions for the Jets, scoring 4 TDs in 2016, but a preseason neck injury ended his 2017.