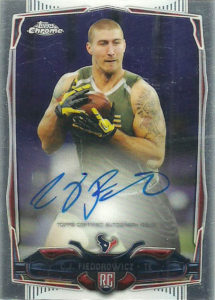 CJ Fiedorowicz is a perfect example of sniping talent off of EBay. Before the 2016 season, CJ was relegated to only being known as a solid run blocker- not the sort of things fans go crazy for in an autograph from a tight end, so prices were pretty cheap on this Houston Texans prospect.  With the arrival of Brock Osweiler as the starting quarterback in Houston (for better or worse,) CJ saw an immediate boost to his bottom line, becoming Os’ bread and butter. The Texans TE’s as a group went from almost dead last to second in the NFL in targets.  In 2016 CJ set career highs across the board as an up and coming player in the league. (One would think that Houston’s offense should feature the tight end to some degree, being that Bill O’Brien’s system is based on the multiple system he ran in New England.) Nonetheless, Fiedorowicz finished 2016 with 54 receptions for 559 yards and 4 TDs.  Now his autographed cards have jumped 5-6 dollars each in resale on EBay- not that I care about reselling them.

CJ had a pretty slow start to his NFL career. A third round choice of the Houston Texans in 2014 out of Iowa, the Texans loved his overall size (6’5″, 265) and thought that he could transition to the pro level at least as a inline blocker behind Garrett Graham. While his rookie season left much to be desired, Fiedorowicz scored his first NFL touchdown in a Week 14 25-13 victory over the Baltimore Ravens. He continued a slow but steady improvement in 2015 catching 17 passes. He had a  breakout season in 2016 as Brock Osweiler’s safety blanket catching 54 passes for 559 yards and 4 TDs, but a severe concussion that he suffered in 2017 drug down severely on his stats.