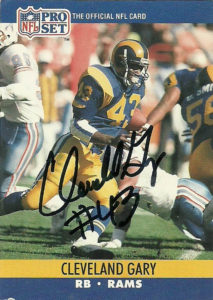 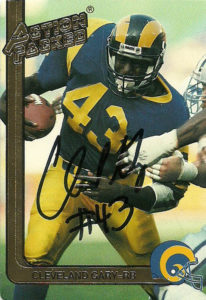 I had been looking for Cleveland Gary for some time. Oddly the ‘old’ LA Rams guard (pre St.Louis) are for the most part difficult to get or resentful of their playing time there.  I couldn’t find his ProSet 1989 entry in his Miami Hurricanes gear, so I just shot out his 90 ProSet instead. He signed these two cards for me in roughly a month. I really like both photos on these cards here. I was always a huge fan of Action Packed, and this moderately close image, framed was typical of this set.

A transfer from UGA, Cleveland Gary was a member of the 1987 Miami Hurricanes National Championship team.  Initially he played behind such football fullback stalwarts such as Alonzo Highsmith and Melvin Bratton before getting his break. In 1988, he ran for 480 yards and 7 TDs, and caught 57 passes for 655 yards and 4 TDs. His 57 catches at the time were a single-season Hurricanes record. The Rams loved their running game so selecting Gary- the premier fullback in the 1989 draft really made sense. He’d be the second of the Rams first round picks in that year, (and the second Hurricane that they’d select) at pick 26.

After a middling rookie season, Cleveland became a bright spot in the Rams overall underwhelming 1990 campaign. He’d work his way into the starting lineup starting 7 games, and lead the NFL with 14 rushing TDs on 204 carries (808 yards).  In one of his finest moments, Gary ran for 3 TDs against the undefeated 49ers in a rain soaked affair that season. The game marked the 49ers first loss in over a year.

He’d be released by the team in late August of 1994 and then was sidelined by appendicitis. Gary recovered and in October of that year rejected an offer from the Dallas Cowboys and signed with the Miami Dolphins. He ran for just 11 yards in 2 games and retired after the season.

Cleveland has done pretty good for himself after football. After dabbling in minor league indoor football leagues he was last spotted as the CEO of the Black Shopping Channel in 2016.