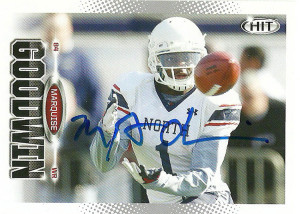 Fleet footed Marquise Goodwin ended his career ranked 11th on the Texas all-time receptions list with 120 catches, and 2,776 career all-purpose yards. He posted career highs in receptions (33), receiving yards (421) and all-purpose yards (888) in 2011.  Goodwin boosted his draft stock after playing in the 2013 Senior Bowl.  He had five catches for 44 yards and returned two punts for 30 yards, leading all receivers in receptions. A track man, Goodwin set numerous career records at UT, culminating in winning the long jump title at the 2012 U.S. Olympic Trials (27-4.25) and finishing 10th in the London Olympics. Despite his commitment to play football, Goodwin spends time actively promoting track and field in Texas. 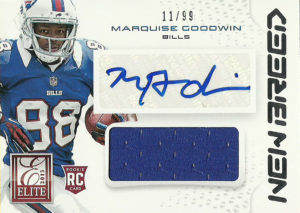 Selected in the third round of the 2013 draft by the Buffalo Bills, Marquise had a decent rookie season, posting 17 receptions for 283 yards and 3 touchdowns, including a 59 yarder against the Chiefs. He also was utilized on special teams posting 16 kick returns for 351 yards. Goodwin’s career however has been marred by injury, missing 24 games in 3 seasons. Going into 2016- it was obvious that he was facing a make or break year. He responded with his best season as a pro posting 29 receptions for 431 yards and 3 TDs in 9 starts. The speed merchant also exposed Darrell Revis for an 84 yard TD.

Spoodog has met Goodwin quite a few times and had an extra Sage floating around that he threw in along with EJ Manuel for an autograph of mine that he wanted. Later I picked up this really nice Donruss Elite 2013 New Breed patch card for a bargain price.