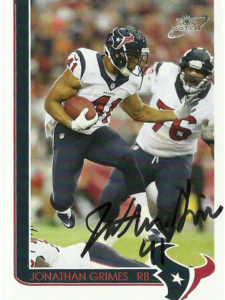 One of my old collecting friends from ‘back in the day’ of the Fanmail website was a broadcaster for the Old Dominion Monarchs team. Grimes was head and shoulders above the competition coming out of William & Mary and dominated the competition.  My friend told me that Jonathan Grimes was THE man, and was a solid free agent signee by the Texans.

Grimes made the roster in 2012, and toiled away on the team’s practice squad.  Other teams coveted him, and he did not stay on the PS for long with the Jets signing him and putting him to limited work as a 3rd down back. The Jets cut him in October of that season.

As the Texans descended into chaos, during Gary Kubiak‘s final season with injuries hitting the Texans’ RB corps of Arian Foster and Ben Tate, Grimes found himself back with the team and was elevated to play on special teams.  He’d eventually finish his whirlwind tour on the roster of the Jaguars by the end of the season.

Cut in August of 2013 by Jacksonville, Grimes returned to the Texans for the 3rd time after Ben Tate was placed on IR.  He scored his first professional TD against the Titans.  He’d finish the season with 73 yards on 23 carries and 6 receptions for 76 yards. Since that time, HC Bill O’Brien has found a way to keep Grimes on the roster.

In 2014, Jonathan ran for 153 yards on 39 carries as he began to settle in as a 3rd down/ change of pace runningback for the franchise.  As injuries finally caught up to Arian Foster in 2015, Grimes saw his workload increase. He put in a career high 282 yards on 56 carries, and 26 receptions for 173 yards, scoring a TD rushing and receiving in the same game.

Despite not playing as much in 2016 due to the signing of new bell cow back Lamar Miller, Grimes proved to be an invaluable change of pace back, pulling out some key first downs in some critical games. He rushed 23 times for 105 yards and caught 13 balls for 94 yards.

I created this card of Jonathan, knowing that he and DB Quentin Demps were going to be at a local Academy signing autographs. Jonathan really liked the card and was touched by my kind efforts. Afterwards I talked to one of the PR honchos for the Texans that also liked my work and gave me his business card, but I was really intimidated to contact him back- something that is still on my list.