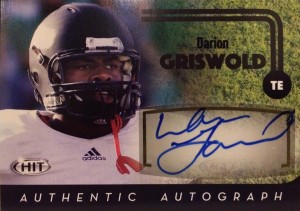 Darion Griswold passes the eyeball test clocking in at 6’5″, 255 which despite his anemic statistics make him an intriguing prospect. Another one of these basketball to tight end players Griswold is considered a project for many teams. Although he has the frame and hands, Big Griz is not considered a refined run blocker, nor an immediate threat off the line, as he is still perfecting his route trees.

His athletic skills alone have qualified Griswold as a late round selection in the 2016 draft.  After the 2016 NFL Draft Darion signed with the Indianapolis Colts. He’d be cut with an undisclosed injury settlement before the preseason began. In 2017 he signed a futures contract with the Atlanta Falcons, but again was cut with an injury settlement before the regular season began.