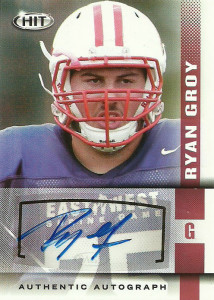 Ryan Groy clocked in at an impressive 6’5″, 320 but went undrafted out of Wisconsin. While playing for the Badgers, Ryan had a lot of experience playing on the line at all positions except right tackle. He also played 13 games as a fullback in 2010. Ryan signed a free agent contract with the Bears and was promoted to the team roster late in the season. He’d be traded to the New England Patriots in 2015, but was cut with an injury settlement.  He was later signed to the Bucs practice squad, and then to the Buffalo bills active roster.  Groy continues to blossom as a lineman in the NFL seeing action for the first time in 16 games, while starting 7 of those contests during 2016.